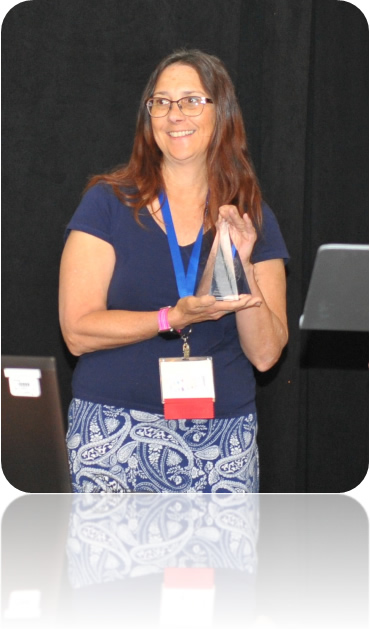 Melissa Johnson, the GIS Manager for Cole County, Missouri, in many ways exceeded the expectations for this award for her Outstanding Contribution to the GIS community and our state. Melissa has been a very engaged and active member of MGISAC since the day she joined the Council. Her dedication, intelligence, and accomplishments complement our worthy past recipients and make her highly deserving of this award. Melissa has gone out of her way countless times in helping the GIS community in Missouri. Her past service to the Missouri Mappers Association while at the same time devoting her many talents and leadership to MGISAC’s council and its many past conferences is an impressive example of her years of “Outstanding Contributions to GIS”. 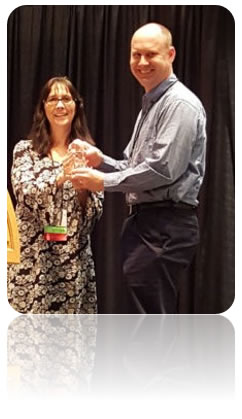 Colin Duewell, our Department of Economic Development GIS Specialist, for his Outstanding Contribution in Communication and Collaboration to the GIS community and our state.  As the one GIS professional for a 900+ employee department that analyzes business and workforce development issues, his work has been critical to advancing Missouri’s efforts to strengthen our economy.

His daily work requires not only a strong set of GIS skills but the equally important ability to communicate spatial data to the policymakers, planners, and the general public.  Much of our work in economic and workforce analysis requires strong collaboration and impacts the decisions of job seekers, businesses, and community leaders so having a keen sense of how to communicate complex geographic data is vital to our efforts.  I have been privileged to be Colin’s colleague for over a decade and, while his body of work is too vast to catalog in one place, I’d like to highlight a few products that showcase his strong communication and collaboration skills:

Colin gathered and analyzed a complex set of IRS migration data that is difficult to visualize regionally in a way that communicates the bottom line of the movement of people into and out of a region.  These reports show the migration of households outward from urban cores but also the attraction of large metropolitan areas for more rural regions.

Colin used spatial analysis to develop heat maps of employee location data, a fantastic way to show worker movements and how interconnected our local economies are.

This is an older example highlighting some of Colin’s contribution to our efforts but is important to understand his depth of communication and GIS talent over the years he has worked in the Department of Economic Development.  Colin developed excellent maps to visualize the issues and, more importantly, helped develop the gravity model analysis needed to evaluate business sales displacement.  I also highlight this report because it received an national research award in 2011 from the Council for Community and Economic Research and showcases Colin’s long-term impact to the department as a great communicator and collaborator.

These examples are the tip of the iceberg in terms of GIS contributions Colin makes on a daily basis to the department and its many stakeholders.  Most of our regular reports demonstrate his GIS influence and can be found at www.MissouriEconomy.org.  From unemployment maps to heat maps of workers impacted by a layoff, Colin is constantly creating well-communicated spatial analysis and mentoring others in this office with basic GIS skills.  He is an excellent leader to our staff and a great hands-on practitioner highlighting the power of GIS to make better decisions. Mike has been a champion and driving force for GIS for Southwest Missouri, and specifically the Springfield/Greene County area since the early 1990’s. His insight and initiative have been the foundation for a solid multi-agency GIS consortium, where project and technology ideas are openly shared. He doesn’t hesitate to shares tools, processes, training opportunities, documentation and data products that are a result of his group’s efforts. With his leadership, the City of Springfield built a powerful GIS by digitizing the Greene County Assessor’s Tax Maps, which were then shared with Greene County and City Utilities. In the early days there were just a couple of people building their GIS. Today, Mike has a team of dedicated, long term GIS professionals that he has mentored and supported in their growth as well. One example of Mike’s extensive list of multi-agency efforts has been his work to coordinate and manage the aerial photography flight contracts and LiDAR cost share programs all these years. These programs have allowed organizations to procure better quality images than they would have been able to do with their own budgets. At the 2013 Missouri GIS Conference, the Missouri GIS Advisory Council Conference Committee Co-chair Andy Wagner (right in photos) presented awards to Mark Duewell (left photo) and Jason Warzinik (right photo).
Mark Duewell – Senior GIS Specialist MU Geographic Resources Center, was awarded the “Lewis and Clark Award – Forging New Frontiers in GIS in Missouri” for his tireless promoter of the MGISAC and his contributions leading Missouri GIS through his work at MSDIS. He organizes the highly successful regional conferences and workshops, manages the list serves, has been a conference committee member for each conference, and is a member on many standing committees. Mark has successfully applied for and received a number of grants used for training local GIS technicians, began the structures project, trained people on metadata, and coordinated the agreement with Washington University making Lidar data available for all. His leadership of MSDIS has led to many improvements, along with Tim Haithcoat MSDIS provides more services then can be expected from their limited budget.

Jason Warzinik is the GIS Manager for Boone County MO and was recipient of the “Outstanding Contribution to GIS” award. Jason as made remarkable contributions as the GIS Manager for Boone County over the past nine years and willingly shares his talents and expertise with other people and organizations. He has greatly expanded and improved GIS services and capabilities in the county and mid-Missouri area through his dedicated work with organizations such as the Shared GIS Consortium, MGISAC, and Region F GIS Coordinators. He has developed and integrated over two dozen GIS Web applications that are widely used by Consortium members and the public. Jason was also instrumental in organizing and providing leadership for the Region F GIS Coordinators group as they worked to build a GIS foundation that could be used as a common operating picture during local and regional disasters and aid with dispatching and mutual aid requests to surrounding Counties within Region F. Ray Fox, USGS Geospatial Liaison for Missouri, was awarded the “Lewis and Clark Award – Forging New Frontiers in GIS in Missouri” for his sustained contributions leading Missouri GIS. Since becoming Missouri’s liaison in 2002, Rayhas fostered over $500,000 of Federal dollars for GIS capacity building in Missouri. He is an unsurpassed leader in the Missouri GIS Advisory Council, serving as Vice-Chair, head of the Data Development Committee, and coodinator and presentor at countless workshops and collaborative meetings. Ray is a true champion of GIS who always has a smile on his face and a “can do” attitude.
Andy Wagner is the GIS Coordinator for Maryland Heights, MO and was recipient of the “Outstanding Contribution to GIS” award. Andy managed the 2010 St. Louis County Imagery Consortium, a regional collaborative acquisition of aerial photography that had been attempted in the past but was finally successful due in large part to Andy’s belief in the value of collaboration and his leadership style.